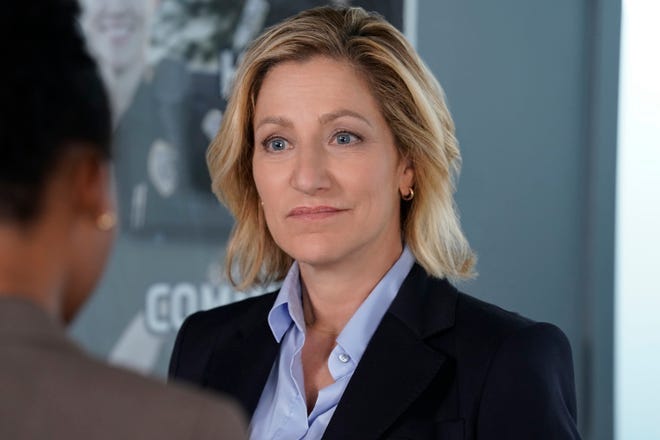 The lead character in a major network TV is a hot lesbian?! YES!!!

Edie Falco stars as Abigail “Tommy” Thomas, a New York City transplant who becomes LA’s first female police chief, in CBS’ “Tommy.” Tommy is a lesbian with an estranged daughter and a complicated personal life, but she remains ever dedicated to her job. Tommy’s daughter, Kate, is played by Olivia Lucy Phillip.

Falco says of Tommy, “She’s a cop to the bone, comes from a cop family. She’s very good at her job, takes it seriously; she’s passionate about it. She has a messy personal life, like many people I know. And she is ultimately a good person. ”

In an interview with Deadline, Falco kept things light when she was asked whether Tommy’s sexual orientation (she is a lesbian) impacts the way she acts and thinks.

“I don’t think it does. I think she is a New Yorker. She’s a woman. She’s a blonde. She’s a lot of things,” Falco said. Her sexual orientation is a part of who she is. She doesn’t wear a shirt that says, ‘I’m a lesbian’.”

But Falco turned serious after a follow-up question asked what the point was making the character gay.

“Because I think it’s important that every single person ‑‑ large, small, different colors ‑‑ gets represented in our television,” she said. “I think everybody in the world wants to look at television and be able to find themselves somewhere. And I think we’ve been leaving huge swaths of the population out of that experience. I could always find myself on television as a kid. You know, the world is changing. We’ve got to change with it.”

For LesFan.com members, the burning question is: who will be the love interest, and what will the fanfic be for Tommy?

Looking at the photos of Falco as Tommy brings back memories of Bette Porter in those power suits. Bring on the fanfic!

The fandom is now available for selection when posting fanfic.