Loading ...
Genre(s): Action / Adventure , Drama , Fantasy , LGBTQ , Mystery , Romance , Sci-Fi , Young Adult
Rating: PG-13
fanfiction(s): The L Word
Character(s): Angelica , Bette , Carrie , Helena , Louise , Minuet , Tina
Number of Comments: 22
Words: 8828
Story Shortlink: https://lesfan.com/?p=105062
Author Notes: Hi everybody, I hope all of you are doing well; First of all HAPPY BIRTHDAY BIBI ???????? I’m here in the Sunbelt writing from the hottest spot of COVID-19, while my neighbors are having a COVID party. Well, we finally know who Carrie is and Tina is finding out she was about to make the worst mistake of her life. What we don’t know so far, is what led Tina and Bette to this situation, almost twelve years ago they were heading to New York to live a life together. Anyway, I need to know why TIBETTE broke and divorced, so I have been following the clues that Laurel Holloman and Jennifer Beals left in their last interviews, but I’m still afraid, who knows what Marja will do in season 2. Remember this is just a fantastic tale; any resemblance to actual events is purely coincidental. You all, please, take care of yourself.
Summary:
Knowing who Carrie is. Angie’s ups and downs; Bette and Tina have, separately, personal reminiscences from the last 10 years looking for their own explanations. 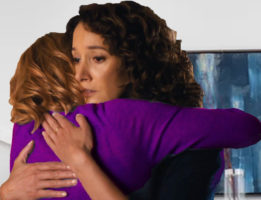 Bette: “Tina, can I ask you a question?”

Bette: “do you love Carrie?”

Tina was looking down and closed her glassy eyes, yes, she loved Carrie, she cared about her, because when she was down after she and Bette broke, it was Carrie who gently consoled her, who took her out to dinners and meetings and rides to easier her pain; for that Tina was grateful; because of that she felt the peace of mind and stability when she was with Carrie, and because of that is that she accepted to be her girlfriend even though she wasn’t in love, she couldn’t because her heart already belonged to someone else, her ex-wife. Even though she knew she couldn’t love Carrie, she considered her a great friend and companion in her future life; but now the blonde felt overwhelmed with grief and bitterness, looking at the situation objectively, apparently, her fiancé has been lying and showing herself as the woman that she wasn’t. A person can’t change that much overnight, no…, Carrie has played with her feelings, her broken heart, her solitude, her needs for a friend.

Tina: (with tears in her eyes) “I… I thought I did…, I thought she was, above all, a great friend, oh my God, Bette, how could I’ve been so blind; in this last week she has been lying constantly at the point that I don’t know who she is any more”

Bette: “I’m sorry, T… and yes, she sounded demanding when we talked by phone yesterday”

Tina: “well, not only demanding, she was a real bitch, I can’t believe it”

Bette felt sorry for Tina; she knows that the reason why Tina left her was to fulfill her professional dreams, but again Bette reflected on how they reached that point… it’s not uncertain.  Bette remembers 8 years ago when they were in New York and Tina worked in a movie studio, while Bette was working half-time in the art gallery she and Kelly had in Los Angeles, how incomplete she felt, coming down from being a gallery owner, a museum director, to a part-time and long-distance art dealer, not to mention that she had to endure the sexual advances of her business partner every time she traveled to L.A. because of the gallery; of course she never told Tina about Kelly’s harassment, not even about that video recorded by Jenny when Kelly came to her house at night and Tina was in New York, ten years ago. It was hard, and due to all those reasons the brunette decided to look for another job then, which she found as commissioner of the Art Committee of Los Angeles city council; when she was selected, she decided to take it, making Tina resign to her job in New York to come with her to L.A. Bette never thought that one day Tina would do the same, but of course, Bette is not Tina, she’s not a quitter, she didn’t let Tina’s professional dreams to interfere with her own career, after all, sooner or later her beautiful wife would come back because she knew very well that Tina loved her…, until that miserable day after their divorce when the blonde told her that she was in love with another woman, that broke her, the brunette felt empty, and that emptiness was scarcely patched by a few lovers. Yes, she was hurt by her ex-wife behavior, she still is, but she understands her and she still loves her. Shyly Bette moved closer to her ex and moving her hand to the blonde’s shoulder she asked.