Chapter 9 – Final Day of the Reunion

Genre(s): Drama , General , LGBTQ
Rating: NC-17
fanfiction(s): The L Word
Character(s): Bette , Tina
Number of Comments: 10
Words: 8836
Story Shortlink: https://lesfan.com/?p=104337
Author Notes: This is a repost of this story originally published in Dec 2019
Summary:
The friends have their final meal together and leave for home. 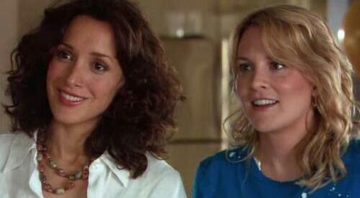 Tina began to wake up about 5:30 on Sunday morning.  She thought about the previous evening and Bette making love to her in such a gentle and caring way. She thought about the dancing and how their friends seem to really enjoy themselves.  She hoped that their night would be as eventful as her as been. She then began to feel guilty that she had not been as attentive to Bette as she wanted to be. So she decided to play with Bette’s breast.

Bette:  Not yet.  Umm…that feels good.

Tina:  Good, because I want to make love to you. Would that be okay?

Bette: Really? Wouldn’t you rather sleep some more?

Tina: No, I rather love on you and then nap a bit.

Tina then kissed Bette tenderly.  Bette smiled. Tina then followed with a kiss of a bit more passion. She then kissed Bette and had her tongue asking for entry into her mouth. Bette moaned as Tina licked Bette’s lips, teeth and tongue. When she started to suck her tongue, Bette was moaning deeply. Tina broke to catch her breath and began to kiss Bette’s neck and shoulder while massaging her breast.

Tina: Oh sugar, you taste and feel wonderful. You are so warm and such soft skin. And your nipples are so hard. Pretty little flowers. Ohm.

Tina was sucking and licking Bette nipples. She then put as much of her breast as she could get into her mouth. Bette was moaning with pleasure.

Bette: Oh god T… leave some for me.

Tina giggled and continued to make her way down Bette toned abs. The mocha skin was beginning to glow in the early morning sunlight. Tina reach around Bette’s hips and started to squeeze her buttocks as she moved to her clitoris. Bette jerked when Tina touch her sensitive clit. Tina then attacked it with vigor.

Bette’s clitoris was now fully erect and her vaginal juices were flowing indicating that Bette was fully aroused and well on her way to the edge of sexual fulfillment. Tina then moved to the vagina and started to lick the outer area and then inserted it a far as she could into the vagina. Bette moaned. Tina then inserted two fingers and started to plunge them in and out at a moderate pace. Bette spread her legs to give Tina more access. Tina inserted a third finger and the vaginal walls started to tighten up. Tina knew that orgasm was not too far away. Tina started stroking as fast and as deeply as she could. She then crooked her fingers and hit the spongy spot which almost always pushed Bette over the edge.