Genre(s): Drama , General , LGBTQ
Rating: NC-17
fanfiction(s): The L Word
Character(s): Bette , Tina
Number of Comments: 2
Words: 29224
Story Shortlink: https://lesfan.com/?p=104336
Author Notes: This is a repost of this story originally published in Dec 2019
Summary:
Last full day of the reunion. Lounging by the pool, dinner at a seafood resturant and a night of dancing. 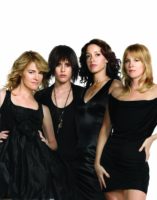 Sometime around 5:30, Bette began to stir. She needed to go pee. She untangled herself from Tina’s arms and quickly went to the bathroom. By the time she was back in bed, she had become chilled from the cool air in the bedroom. She noticed that Tina had turned over and had her back to Bette.  Bette snuggled close to Tina and spooned into her backside. She purposely rubbed her bush into Tina’s butt. This made her slightly aroused. She then began to think about the upcoming day and evening and decided that she wanted their time on Saturday night to be special. She then decided that if Tina wanted sexual attention on Saturday morning, that she would limit it to a single orgasm which could be produced quickly and efficiently for both of them. She wanted Tina to be at her peek of desire when they entered their bedroom at the end of Saturday night. Bette wanted this night to be memorable for both her and Tina. She hoped that the others in the household would have their own memorable moments. It would be the perfect ending to a week of vacation and reunion. But that was not within her control. She would provide the opportunity but each would have to provide their own memories.

Tina felt Bette join her in the bed and felt her arm draped around her waist. She then felt Bette’s bush rub slightly on her butt.

Bette: Yes, it does.

After a few moments of silence. Tina moved Bette’s hand to her breast. Bette automatically started to kiss the back of Tina’s neck and playing with Tina breast. Tina’s began to breathe heavily with soft moans which only encouraged Bette to play more diligently with her breasts.

Bette:  I remember the first time I touched your breasts? It was so heavenly an experience for me. Your nipples were so responsive and to think this was a brand-new experience for you: to be touched by a woman. And I had the honor of being that woman. God, what a turn on.

Tina:  Oh god Bette touch me please. I need you to touch me.

Bette slide her hand down her belly and into her bush.