Story written on April 28, 2020 by MoreThanSatisfied. 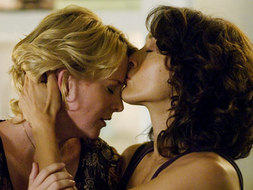 On Sunday morning, Tina rushed around the bathroom of their hotel suite. She was finishing up her makeup in the mirror while Bette lay back on the couch in the sitting area. She hadn’t slept well and had been up early, packing up their things and making sure they were ready to hit the road. They would meet the framily in 15 minutes to share breakfast in the hotel restaurant before everyone got on the road to head back down to Los Angeles.

Bette’s arms were clasped behind her head, her elbows out to the sides. In her mind, she replayed the words she’d spoken at Sidney’s memorial; going over that memory in detail. She was proud of herself. Happy that she could stand in front of a room full of people and hold it together. And pleased that Tina had been her steadying gaze in the crowd. She sighed contently, listening absently to the sounds of her girlfriend’s ministrations.

Tina frowned and her eyes darted toward the sitting area. “Take my time?” she repeated quietly.

She must be feeling really good. Tina thought, marveling at her lover’s patience.

Bette wasn’t sure if her father would actually join them. She hadn’t heard anything further from him since he’d been asked to leave the night before. She’d vowed to keep her temper in check and remain poised, whether he was there or not. He couldn’t control her emotions. She was in charge of them.

There was a brief rapping of the front door of the suite and Bette sat up, swinging her legs around. She was dressed comfortably in a pair of loose-fitting white chinos and a trendy rose-colored top. Her sandaled feet carried her to the door. She was still smiling, assuming her morning visitor would be her sister or nephew.

Bette swung open the door and said, “Good Morning!” before her eyes registered the identity of her morning visitor.

Her smile quickly fell and her dark brown eyes opened wide, her mouth agape. She stared into the worn blue eyes that had once haunted her both in dreams and in waking nightmares. The hair that had once been a dirty blonde, was now grayer than anything and was pulled back into a sophisticated swoop, held in place with a red-lacquered clip.