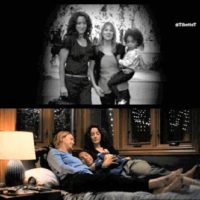 “Yeah, I guess you do.” Bette bowed once again to Tina’s knowledge of all things entertainment. “Matching necklace for you too my love?”

“We’ll start a new trend.” Tina grinned her smile that Bette loved so much and found irresistible. Her dimples deep and adorable.

“I’ll take that chance too Kennard.” Bette gazed into the blonde’s playful eyes, caught in the wonder of the beauty before her. “It sounds like a wonderful plan.”

“Deal Porter.” Tina laced her fingers with Bette’s, feeling her strength and seeing their future in the brunette’s joyful eyes . . . .

It was an early Friday morning in the last week of January when Bette slowly opened her eyes, gradually adjusting to the beginnings of visible natural light in the master bedroom. The temperature in the master bedroom this morning was cool. The brunette imagined the temperature outside was probably in the low 50’s. Bette quickly reached out from under the blanket that covered her and stretched to look at her phone on the night stand for the exact time.

She hurriedly brought her arm back under the covers and circled it around the sleeping precious woman in their bed, in their house and in her arms.

Since returning to LA, the strawberry blonde producer had been spending almost every night in the Silver Lake home she was now sharing with the tall brunette. Over the course of the past 2 months, Tina had arranged a large majority of her belongings and personal items into the house. Bette has graciously made space available for Tina in the house and all her ‘stuff’ as they both humorously referred to Tina’s possessions and wardrobe.

They studiously sorted through some of their most cherished items from their long past as a couple and after when Angie was born. Even when they had gotten back together a few years later and of course from their marriage. Bette had kept boxes of items from their life together in storage in a section in the large garage on her property. The couple slowly sorted through those boxes and decided what to really keep, what to display now in their shared home and what to put away for Angie for her own family if she wanted them somewhere down the line. Bette and Tina agreed that the other items would be donated to the homeless shelters around the city.