Upon The Reaches Of The Darkest Moonlight

Loading ...
Genre(s): Alternate Timeline , Horror , Humor , LGBTQ
Rating: PG-13
Fandom(s): Xena: Warrior Princess
Character(s): Gabrielle , Xena
Number of Comments: 4
Words: 275282
Views:
Story Shortlink: https://lesfan.com/?p=112699
Author Notes: This is the first book of the Waking Light Series
Summary:
A night by the campfire turns in to a nightmare for Xena and Gabrielle. As they are both drawn in to a deadly battle in which they will both learn what it is to be human and to become inhuman. 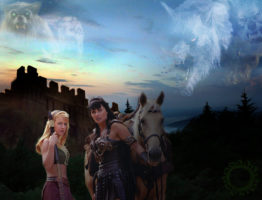 Disclaimer. This story contains violence, as well as love between two adult women.

Disclaimer. The Xena Warrior Princess series and its characters are all copyrighted property of MCA/universal

Disclaimer. This story is based on the events of the Dark Xena comic series, which is like early season four only with the Yin Yang Chakram. This is the first book in The Waking Light Series. The second book in this series is As The Winged Serpent Rises and the third book is Embrace The Waking Light.

Many years ago in the region of Arcadia

The dark haired man’s brown eyes travelled upwards to look at the burning village in the distance the screaming had now died down as every one in it had been killed. He slowly sat himself down on the steps of the temple of Athena the only building which had been untouched by the brutal massacre there was a cold silence in the air which was chilling to the soul. He could feel the blood as it ran down his armour from a large wound in his side, he would normally care for such a horrible wound but today he didn’t care despite the pain it caused him. He looked at his hands watching as the blood dripped off them it was human blood from all those he had killed. This was victory? It didn’t feel like victory, how was it victory when you were killing unarmed men, women and children? It wasn’t victory it just murder and he hated that everyone around him couldn’t see that. He hated this war and he hated having to do this! All he could see was the innocent faces of those he had killed staring back at him haunting his dreams.

He felt guilty and ashamed to call himself a warrior this was something warriors didn’t do and he had no idea where to turn anymore everything was just messed up. He could see the dying sun in the horizon he used to think that doing this was right but it wasn’t and it would never be right. He had walked through to many fields and seen to many dead faces. Things had to change and they had to change now they couldn’t go on like this he couldn’t go on like this anymore. He couldn’t bring himself to kill one more innocent if society had to change then it needed someone to change it. He didn’t consider himself a leader he had never led anything he was a foot solider who did as he was told he had no idea where to begin but he had to start somewhere there had to be others who thought the same. The words of the rebels were now ringing in his ears all so painfully now, but he knew that they were words of truth and he needed to listen to them.