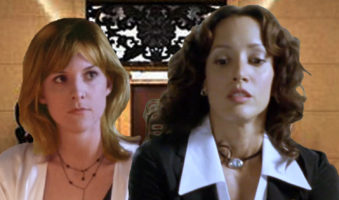 The night was warm, and six young women were gathered at Bette’s beach house from before lunch; they have been working the whole day making turns to listen to and selecting the collected information by the micro spy-drones or the hacked phone. So far, they have found that Melvin is looking for Buckley and has sent his men to find her; the girls also learned that Aaron is in Canada locked up and under surveillance and constant interrogation by Melvin’s thugs, but the inactivity in Melvin’s phone suggested a quiet and enjoyable Sunday evening.

The turn to listen to Bette’s father’s phone is now for Alice, who, in the kitchen, was playing a computer game on her tablet, and at the same time listening with the speaker on the computer system which tracks the hacked phones; the rest of the girls were making jokes about Helena and Louise in the backyard.

Suddenly the computer alarm showed an incoming call in one of the hacked phones; Alice didn’t stop her game, and barely listened to the conversation it was Bette’s father’s phone; Melvin was talking with one of his ruffians:

Man: “yes, the woman you hired has set her up; Buckley is parking her car now”

The mention of the last name, made Alice jump to the ceiling and put her tablet away.

Melvin: “okay, catch her and bring her here”

The phone call ended; Alice left the kitchen and ran to the pool to tell the others what had just happened.

In a few seconds, all the girls came to the kitchen waiting for the news.

Bette: (looking very worried at her girlfriend and whispering in her ear) “they may catch Buckley any moment, if that happens we must go on the run”

Tina: (swallowing a lump in her throat) “I’ll be fine in my place, nobody could find me there”

The mature woman tried not to panic when the men got closer to her.

Faye Buckley: “I’m sorry; I have an appointment right now, maybe in another time”

Man 1: “your appointment is canceled, you will come with us”