Loading ...
Genre(s): Action / Adventure , Crime , Drama , Fantasy , LGBTQ , Mystery , Romance , Sci-Fi , Young Adult
Rating: NC-17
fanfiction(s): The L Word
Character(s): Alice , Bette , Dembo , Fay Buckley , Helena , Henry , Kit , Louise , Maxine , Melvin , Peggy , Shane , Sharon , Tasha , Tina
Number of Comments: 18
Words: 4958
Story Shortlink: https://lesfan.com/?p=111135
Author Notes: Hi, everybody, I hope you all are doing well; I now, I am very late. It has been a hard month, busy, sad and overwhelmed. I started writing this chapter, as soon as I posted the former one, but it has been hard to finish it for different reasons; but ultimately, I was shocked with the news about GQ. Some of us agree that GQ isn’t a canon; not only because it doesn’t follow the original story line and it’s no time-linear, but also because contradicts it (like GQ is happening in a parallel universe). When OG ended, we knew that TIBETTE was endgame; our girls reached a level of maturity in all aspects and there was no other option for them but to follow the path of many happy lesbian couples, together forever. But, apparently some so called lesbians don’t believe in lesbian love. Well, I believe that love between women can be strong and everlasting, and most the times is not just for a random hook. Too bad that some writers and producers think that they can make a big name for themselves by destroying an iconic couple and role model for our community as it is TIBETTE. I was going to title this chapter 25 “aftermath” but after watching the trailers of GQ-S2 and the picture of “the three ladies in a sofa”, I decided to name it “aftershock” because of the earthquake that the trailers meant for some of us the TIBETTE fans; I also decided to divide this chapter in two parts and NO CLIFFHANGERS. Please, take care of yourselves, stay safe.
Summary:
The shooting in the parking lot triggered some events and uncovered new facts. Things will change for some of the characters in this story. 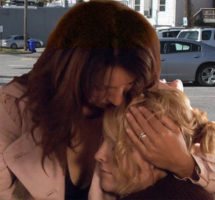 Tina was scared, she knew that crazy Henry would shoot Bette, and she couldn’t allow her beloved to die; in her mind, though fictitiously, that happened ten years ago, now she couldn’t live without her fiancé.

The blonde jumped in front of Bette to protect her with her body.

At the same time, in a parked car, Buckley followed the scene. She doesn’t care if Henry kills Melvin Porter’s daughter but, she needs Tina alive, her family’s money, her inheritance depended on finding Miranda, besides Faye Buckley still has a crush on her.

Faye Buckley: “that man is going to shoot the wrong person.”

Faye Buckley: (opening the door of the car) “I can’t allow that.”

Henry had his finger on the trigger and was pointing at Bette, then everything happened simultaneously, a shout disrupted his concentration, and Tina jumped in front of her beloved fiancé.

The bleeding blonde fell in Bette’s arms; Henry shot again, this time, Buckley fell in a pool of blood; Dawn Dembo ran toward Henry and shot. The crazy man staggered and finally fell to his knees to the ground, dropping his gun and hitting his head on the sidewalk.

Dawn ran toward Buckley; the woman was still alive; then, turning around, she looked at the couple; Bette was crying, but Tina, bleeding profusely, was able to seat on the floor.

Dawn Dembo: “are you two okay.”

Dawn checked Tina’s left bleeding arm, the bullet was probably inside close to the shoulder, for a few inches it didn’t enter through her chest, fortunately, it didn’t happen, but they have to stop the hemorrhage or the blonde would bleed until dead.

Dawn Dembo: “we must make a tourniquet to stop the bleeding.”

With the help of Dembo, Bette took her handkerchief, tore it into two pieces, and tied it around Tina’s arm, above and below the wound. The blonde was shocked and in pain, and couldn’t speak. Bette took her phone and called Louise, while Dembo did the same by calling 911 and following, she made another call to the police.