Loading ...
Genre(s): Action / Adventure , Crime , Drama , Fantasy , LGBTQ , Mystery , Romance , Sci-Fi , Young Adult
Rating: NC-17
fanfiction(s): The L Word
Character(s): Alice , Bette , Carmen , Dana , Helena , James , Kit , Louise , Mabel , Marcus , Maryann , Maxine , Melvin , Peggy , Phyllis , Shane , Sharon , Tasha , Tina
Number of Comments: 12
Words: 6561
Story Shortlink: https://lesfan.com/?p=111218
Author Notes: Hi, everybody, I hope you all are doing well. I’m sorry to keep talking about my feelings concerning GQ, but I want to clarify that I don’t hold JB or LH responsible for any of the craziness in the show. I need to tell you that, is not that I don’t like ROD, VW, or SM; they all may be excellent actresses, singers, or whatever is what they do, and I have a deep respect for them, and personally I hope we all respect them here. But I disagree with the treatment the show is doing to TIBETTE. When I say the show, I'm referring to the person(s) who is or are behind the production and the writing of it. Those TinCar, GiBette, PiBette and similar, probably were created to attract more audience to the show, and maybe at the end of the last season (perhaps S2 may be the last), they'll put back TIBETTE together; well, I don’t think it would work with most of the fans. Another thing that annoys me about the show is the image that is giving to our lesbian community. We are not compulsive cheaters, and we can have serious long-term relationships, lifetime commitments. Okay, stop grumbling about what we can’t change; in the last chapter (25—A), I mentioned that it wasn’t going to be any cliffy, and it wasn’t. It’s just the old habit of leaving a cliffhanger in each story; I just wrote an automatic sentence with no particular meaning, or maybe just a longshot. Please, take care of yourselves, stay safe.
Summary:
The girls try to go back to their usual routine. No news about Dembo’s intervention in the shooting. Someone is lurking around but doesn’t get the fuel to ignite a new bomb. Something is going on in the background; Peggy’s mysteriousness will bring a surprise. 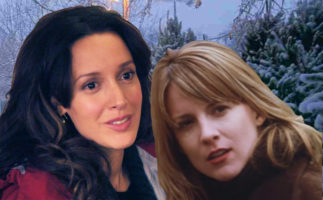 With an arm sling on her left side, Tina was in her office searching for something on her computer. The common door with Bette’s office was open on purpose by the brunette, so she could watch her fiancé’s health all the time. Last week, Louise has done a surgical revision on Tina’s scar; the procedure took place in her private practice with a very successful outcome, but the blonde still needs to wait for a few weeks to be totally healed.

The girls have had three meetings with Dan Foxworthy. The therapist told them that their emotional distress comes from their early childhood. In the first two sessions, Dan discovered that the root of most of their problems came from the separation from their mothers, the biological mother for Bette, and the subrogate mom for Tina. Dan and the girls agreed to meet regularly twice a week.

At home, Bette and Tina had time to talk about the last events. One thing that has them puzzled was the presence of Dawn Dembo at the crime scene. From the information they received from Captain Tasha Williams, through Alice, they learned that Dembo was with Buckley in a car in the parking lot; and, after Henry shot Buckley, Dembo shot Henry, probably saving the couple and Buckley. The amazing thing was that despite their history, Dawn Dembo walked toward them to help; later, she talked with the police without any problem as if they knew who she was.

Tina and Bette asked Maxine about what Dembo told them from the events in Santa Martha ten years ago “it wasn’t my idea” were Dembo’s words. All Maxine’s told them by phone, was, that she knew Dembo’s mother, but not her daughter very well. In those conversations, the old lawyer tried to focus their talk on her big concern about Bette and Tina’s security.

The brunette asked Peggy too, but this one said that she didn’t know Dembo at all, so if it wasn’t Dembo’s idea of deceiving Bette ten years ago, whose idea it was.

Today is the first day at the office for both girls after the shooting. At the company, they found new security measures and more guards in the building. The good thing was the absence of Melvin, the director of the board wasn’t coming to work since two weeks ago when an FBI team came looking for him, and the tall man left the building through the back door.