Lincoln Square, West Side – Tuesday – 9:05 am in the morning.   The tall man forced the door breaking the lock, and scaring the secretary, but inside Bette was ready to fight for her life. The boisterous entrance of Melvin into the office ignited Bette’s anger, on her side, Louise was frightened. Bette: “what 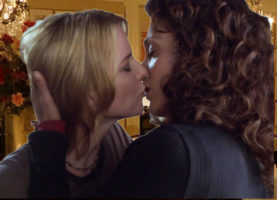 The tall man forced the door breaking the lock, and scaring the secretary, but inside Bette was ready to fight for her life. The boisterous entrance of Melvin into the office ignited Bette’s anger, on her side, Louise was frightened.

Bette: “what the hell is this, why are you making such noise and breaking my door, why can’t I have a little privacy in my own office?”

The tall man disappointed looked at Bette and Louise very close to each other and at the disconnected computer terminal, this is not what he imagined to find.

The brunette, on her side, didn’t even know the meaning of her own words, but they confused her father, who was expecting to find Bette with her girlfriend and hacking on his account.

Melvin: “err…, I have been looking for you since yesterday, nobody seems to know where you are”

Bette: “that’s bullshit, if you have something to say, just leave the message with my secretary, I’m a very busy person, what’s up with you?”

Melvin: “just wanted to know if you’re fine; there is a crazy man outside there  shooting everybody, things are dangerous around here”

Bette: “don’t tell me you’re concern about my wellbeing, you know that everything is your fault, you brought Henry here”

While father and daughter were arguing, Adele was walking toward the terminal and Bette noticed.

Bette: “who the hell are you? Get out of my office or I call security”

Melvin: “there’s no need to be harsh, Adele is my new assistant”

Bette: “I really don’t care if she’s your new mistress, I don’t want her here”

Melvin: “okay, we’ll leave, but I’ll talk to you later”

The bewildered tall man left the office with several questions on his head; he knew that girl in Bette’s office, she’s the daughter of the physician who went crazy after her female lover and her newborn got missing forever many years ago.

The man walked toward his office in silence followed by his new assistant; in his way, his mind traveled into a ghostly memory twenty-eight or twenty-nine years ago, the time Melvin went to South America because Maxine asked him to come along and he accepted; he didn’t go there to do charity as the rest of the group, he went because of Miranda, some kind of sister in law, a very rich woman, who was investing a huge amount of money to help the poor, and, of course,  he was interested in getting his hand on that money.