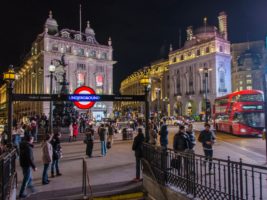 Please enjoy this chapter where we see the soon to be couple enjoying time together.

Looks are lingering and hearts are beating fast.

And of course, a twist at the end!!

As always – thanks for reading.

Previously from Doctor of Hope Chapter 10 . . .

By the end of this hectic week, both women were anxious to do something out of the norm. Something new, something different. Each woman having had a trying week with classes, studies and dealing with whatever ‘it’ was going on with them. And for Tina, worrying about her mother too. They wanted to escape the academic notes and lectures and personal private questions for just a few hours. Just simply have some fun and loose themselves for a little while. Let go and just be.

So as Friday rolled around, Bette had a lot of bent up energy and wanted to release all of it. She had previously promised Tina a taste of the London night life around the university. So over their usual cup of coffee for the brunette and tea for the blonde, Bette reached within herself and found the courage to speak with Tina. She suggested that they check out a few night spots. Tina had happily agreed, anxious to loosen up and blow off some built-up steam too.

Tina knew at some point this weekend, she would have to discuss with Bette what had transpired last weekend, but not tonight. No tonight, she just wanted to spend a few hours with the brunette, relaxing and enjoying her company. She wanted to expand on their bond and was anxious to see where they would go from here.

Truth be told, Bette knew she had to be on high alert around the blonde. All those stolen glances this past week had caught up with the brunette. She had this feeling of excitement deep inside and wanted to explore its origin and where it could lead.

The two roommates made plans to take in a few pubs after classes on Friday evening. To relax and just decompress. It sounded like a wonderful idea. Each woman looking forward to their special time together. They couldn’t wait for Friday night to arrive . . .