Loading ...
Genre(s): Drama , LGBTQ
Rating: PG-13
Fandom(s): The L Word
Character(s): Bette Porter , Shane McCutcheon
Number of Comments: 44
Words: 10433
Views:
Story Shortlink: https://lesfan.com/?p=109028
Author Notes: Hello everyone. Happy Spring! Well here it is, my first attempt at writing a story. Trust me when I declare that I have a real appreciation for everyone out there who is courageous enough to put pen to paper as it were. Not an easy task. This is a single chapter and there is no plan to do any more with it. It’s simply a what if. I welcome any and all feedback and critiques. Either by public comment or private message. Lastly, I would never have had the courage to take this step without the support and encourage of someone pretty special. You know who you are. Thank you! Enjoy “Finding the Light.” Billy

And now, on this beautiful Saturday morning, Bette had finally taken yet another important step. Buying paint. Such a seemingly simple act. Symbolic? Perhaps. But it meant that Bette was making some small changes and moving forward. Bette had also talked to Shane about dating Maya. Bette and Maya had been spending a lot of 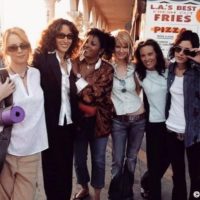 And now, on this beautiful Saturday morning, Bette had finally taken yet another important step. Buying paint. Such a seemingly simple act. Symbolic? Perhaps. But it meant that Bette was making some small changes and moving forward. Bette had also talked to Shane about dating Maya. Bette and Maya had been spending a lot of time together and were becoming very good friends. But Bette believed in her heart it could never develop into anything more than friendship as she had determined there would be no more Felicity’s in her life. Ever. Bette knew Maya wanted more and the brunette was dealing with that. She cared for Maya a great deal and hoped her friend would understand. But Bette could offer her nothing more than friendship at this point. This was a definite sign of personal growth. Finally. Shane had been by Bette’s side every step of the way. And Shane had been processing her own grief and her own sadness and her own vulnerability over the loss of Quiara. And Bette had tried very hard to be there for Shane. The two women were so much more that best friends, they were sisters.

Shane was suddenly aware of a shift in Bette’s demeanor. She had gotten very quiet. Yes, Bette was sometimes prone to introspection but today had been different. She had been very outgoing. Still, had it been too much too soon? Shane decided to keep the conversation light and easy or to simply drink her coffee in silence. Either was fine. The great thing about their relationship was that the silences were very comfortable, sometimes even preferred, and always welcome. Bette was now in a fairly good place and all that mattered to Shane was that she stayed in a positive head space. So they ordered their coffee and Shane tried to decide if she wanted some food. Food was a safe topic. “I know you have a lunch date later but are you interested in getting anything to eat? Bette?” No answer. “Want to split a danish? Bette?” Again, no answer. Shane was now concerned. “Bette, are you okay?”

Bette took off her sunglasses and stared at the passing traffic. Shane thoughtfully took in the expression on Bette’s face. She knew that expression. She had had seen it before, but she could not quite place it. It was kind of like the look she had when Alice had gone off on her over Felicity. No wait. The look Bette had when Alice had been acting a fool on the pink ride and called her a cheater. No. But closer. The way Bette had looked at Jodie right after that? Not quite. Was it the look on her face as she addressed the crowd after the election had been called for Milner? No. Not really. What about that morning at Dana’s Bar as she and Tina talked about having seen Angie’s sonogram? Close. Maybe the way Bette lovingly looked at Tina after the former couple had gently squeezed hands before catching themselves and breaking apart? Much closer. The look of adoration Bette reserved for only Tina? Much, much closer. The look on her face when talking about Tina before she had learned about the engagement? The look when there had still been some sparkle left in those beautiful eyes? And love? Always, always, always love. A mixture of excitement and love and… hope… yes… hope… and still… even more. Shane studied Bette and saw something she had rarely seen. Something Bette could usually mask quite well. That Bette looked distracted was a given. But she also looked scared. That was it. Bette looked scared. Shane took hold of Bette’s arm. “Hey? What’s up, Missy? You seem so far away.”