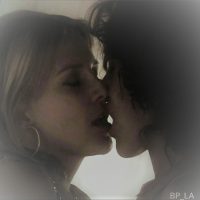 Previously From The Sequel Chapter 4 ~

So Tina had willingly given in to the brunette’s request. She agreed to go on their first date and allowed Bette to plan every detail. The brunette had kissed her and promised a date she would never forget. Bette promised Tina it would be her last first date.

The blonde was nervous the day of the actual date and yet she was extremely excited as well. She was more than infatuated with the stunning brunette. And she knew it. The brunette was constantly in Tina’s thoughts and on her mind. The movie executive was consumed by the gallerist. Tina wanted to know everything Bette. What she thought, how she felt, what she wanted from life, what her dreams were and how she saw a possible future for them.

And Bette felt the same way about the blonde. Tina occupied her thoughts 24/7. She was borderline obsessive about the studio executive. She was clearly addicted to the young blonde. She was fascinated by everything Tina. She too wanted to know every single thing about the lovey blonde. She had never met anyone that captivated her this thoroughly before. And she was coming around to believe that she would never meet anyone like Tina ever again.

And Bette had known many women over the years. But Tina was different. Tina was special. Exquisite. Tina was important and Bette was finding that as each day went by since they had met, she wanted the blonde more and more. She couldn’t explain it, didn’t want to explain it. It didn’t make sense. But her heart won out and she was helpless to resist. Tina Kennard had gotten under her skin and deep inside her heart.

She just wanted all of Tina.

She wanted to hold and cherish the sexy blonde forever.

She knew she was falling in love.

And she was thrilled with the idea and the woman who she was falling for.