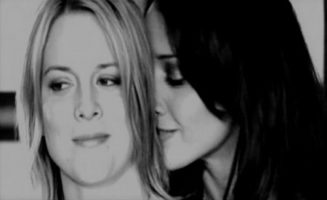 Next few weeks passed by in a blur of activity.

They dutifully attended individual therapy and couples therapy once a week. Bette worked and studied a lot. The interior renovations were almost completed at her law firm. Bette held a few more staff meetings where issues were fully addressed. Each employee was given an opportunity to ask whatever question so that it was loud and clear for everyone how the firm would function under Bette’s CEO leadership and Eva’s legal practice management.

Meanwhile, Tina continued to garden with Kate and searched the Internet for job opportunities. It turned out to be difficult for her to find a decent accounting position, because according to her new identity she had zero experience as an accountant. Under the name of Julia Pierce, she was an advertising specialist, which was a good option as well, but not as good as a prospect of coming back to accounting. On top of that, Tina didn’t know a thing about advertising.

”Another rejection,” Tina heaved a frustrated sigh at her laptop. She sat back and slumped in the chair, raising her weary gaze at Bette who had come home at a surprisingly earlier time than usual.

”What was the job?” Bette wondered nonchalantly, looking inside the refrigerator and examining the contents.

Popping a couple of olives in her mouth, Bette took out ham and cheese from the refrigerator. ”Why do you need that?” she asked, chewing the olives vigorously.

Tina lifted her eyebrows. ”Why do I need what?”

”A part-time job,” Bette replied lightly as she walked to a cupboard where she pulled out a loaf of bread.

”A part-time job is better than no job, don’t you think?”

Bette shrugged in an absent-minded way that annoyed Tina. ”As an assistant accountant? You deserve better.”

Tina frowned. ”Hey, I don’t expect to become head of an accounting department anytime soon. Frankly, I don’t even want to be in charge anymore. I’m fine being an assistant.”

”At a packaging company?” Bette asked then, her tone slightly belittling.

Tina glared at her dark-haired girlfriend who appeared in a rather happy mood despite the fact that Tina was obviously upset. ”What’s wrong with a packaging company?”