LOCKDOWN Chapter 8: UNBURYING THE PAST – PART I

Story written on December 9, 2020 by proteonomics.

Loading ...
Genre(s): Action / Adventure , Drama , Fantasy , LGBTQ , Mystery , Romance , Sci-Fi , Young Adult
Rating: PG-13
fanfiction(s): The L Word
Character(s): Angelica , Bette , Carrie , Helena , Kit , Louise , Minuet , Shane , Tina
Number of Comments: 21
Words: 9043
Story Shortlink: https://lesfan.com/?p=106793
Author Notes: Hi everybody, I hope all of you are doing well; It has been a long time since I posted something, mainly because of my time; very busy. I listened to the pants podcast with Laurel Holloman very early today. It was fantastic, and she is coming back as Tina to GQ to co-parenting with Bette; also, we already know who may be Carrie (Deadline magazine), Rosie O’Donnell. From my point of view there are still hopes in this world, keep going and perhaps someday we could have again TIBETTE together happily married 4ever. Remember, this is just a fantastic tale; any resemblance to actual events is purely coincidental. You all, please, take care of yourself.
Summary:
The painful but needed walk through memory lane starts here; let’s discover what they didn’t share, the lies and hidden facts that grew like a snowball to take them to their current situation and find out if there is hope for these two. 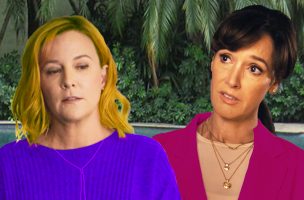 Drinking her coffee, Bette was watching at her ex-wife whose eyes were fixed in a dead point somewhere in the pool. The time has come for them to open their hearts, and the brunette is the one who decided to start this hard but needed conversation, nonetheless now she is nervous and isn’t sure how to approach the subject. A long silence that was screaming loudly stopped Tina from her thoughts; with an interrogating look, she turned to see her ex-partner who opened her big eyes.

Bette: “T, I think we should talk, and I know this isn’t going to be easy, just tell me when you’re ready.”

Tina: “yeah…, I know, Angie is much better today, and it’s time…, yes, I’m ready, but are you also ready to speak openly without hiding any detail?”

Bette: (frowning her brow and looking scrutinizing at her companion’s face) “do you think I’ve been hiding things from you?”

Tina: (looking at the dark big eyes to lowering her sight at the end of her answer) “I think that we both have kept things that we haven’t shared, and I believe that in a certain way it led us to make decisions that we tacitly assumed we both agreed.”

Bette: (sighing) “well, in that matter, perhaps you’re right…, yeah, I agree on that.”

Tina: “are you willing to walk this path with me, to retrace the… how could I call it… the wrong steps, and please don’t misunderstand me.”

Tina: “Bette…, don’t take it badly, it’s just a manner of speaking…, or are you suggesting it was my wrong steps?”

Bette: “no, I’m not suggesting anything, you called it the wrong steps, no me, and that wasn’t what I meant.”

Bette: “Tina, many things happened, and you’re right, we didn’t talk, I won’t deny that I was fearful to reach this situation, and I don’t want to discuss if it was your or my fault, I just want us to talk and see if we missed something because for me, I still feel like something hit me very hard several months ago and I still don’t know what it was…, and to tell the truth, T, I still have strong feelings for you and as we both know, Carrie wasn’t a solution for whatever happened between us.”