THE VAMPIRE AND THE SLAYER Chapter1: VAMPIRES

Story written on November 1, 2020 by proteonomics.

You have always been a slave, you just couldn’t see the chains (W W-P from Angel)   Chicago Friday evening – the ‘Seven Day’s Nights’ bar-dance club   The blonde is sitting at the bar as every night in the last month, she has followed the trace of blood she was looking for since a 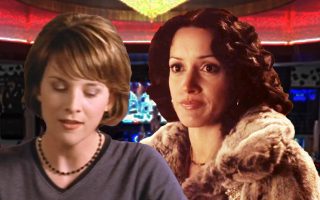 The blonde is sitting at the bar as every night in the last month, she has followed the trace of blood she was looking for since a long time ago, and she’s determined to end with the evil plague that three years ago destroyed what was left of her family, her twin sister, Julia. However when she arrived at this bar something else took her attention, it was a group of five girls almost of Tina’s age or perhaps a little older, who, every night, boldly take the best table in front of the stage, ordering food and drinks without looking around as if they were superior to the rest of the costumers; one or two of them usually took the stage dancing, and sometimes even singing a couple of songs to come back to their seats. Boys and girls in the bar were attracted to them, as the moths are attracted by the light of the fire as disoriented victims. The girls usually despise most of the boys but kept the young girls around, who they usually took with them when they left. Tina wasn’t an exception; she was several times distracted by the specific performance of one of the girls, the tanned skin tall brunette, an authentic beauty a gorgeous girl.

Initially, the blonde didn’t understand that feeling, she was never attracted to any boy or girl in particular, in high school she was shy and focused on her studies. When her parents passed in a mysterious accident five years ago and the family lawyer Fay Buckley talked to them about the accident and their inheritance, since then it was only her and her twin sister Julia; they both attended together at the university; while Julia had a normal social life, Tina never put her eyes seriously in any boy or girl, though she recognizes that she always like the company of other girls, but now, she was feeling this need to watch dancing this beautiful tall brunette.

Sometimes in her apartment, after a night in the bar, she fell asleep having those dreams with the brunette dancing on the stage and suddenly, looking at her making sensual swings with her hips while walking toward her; in her dreams, just seeing the brunette advancing to her, every time, Tina felt the fire burning inside her body and her hands sweating; with each step, the brunette made toward her grew an itching, a sweet pain between her legs, and those butterflies on the lower part of her belly; in those dreams always the brunette kept walking toward her and she waited for her with eagerness and anxiety to touch her, but that was all, the dream always fade and Tina always woke up wet.