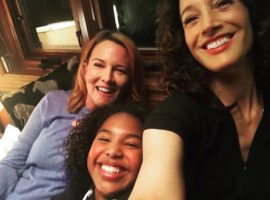 She simply couldn’t contain her happiness any longer. That the blonde was hers again and that she had fully and willing given herself to the producer. They were madly in love and could show each other again just how deep that love went. How boundless it was for both of them.

Bette looked down and tightened her hold on the beautiful blonde. The tips of her fingers stroking Tina’s mid-section. Tina sighed in return as she began to wake from her slumber. She pressed her butt into the brunette’s body, feeling the fine soft hairs covering Bette’s mound. It making Bette chuckle.

“Well good morning.” Bette brushed some strands of hair away from Tina’s ear and neck and placed short kisses there.

“Mmmm, morning hon.” Tina smiled and wrapped her arms around those of Bette as she lay in their tight embrace.

“You trying to tell me you didn’t get enough last night?” Bette whispered into Tina’s ear.

“Oh I am, believe me.” Bette wanted to know if Tina was as happy as she was. “How are you this morning?”

“Great honey, but kinda tired.” Tina groaned as she moved to lay on her back, but still within the brunette’s embrace. She gave a short yawn. “Sorry, but I have a really good idea why.”

“Oh, really?” Bette brows shot up. “Why would that be? Up late last night were you Ms. Kennard? Maybe you should go to bed earlier missy.”

“Well that might be a little hard to do.” Tina looked across at the brunette as Bette leaned on her elbow and looked at the blonde.

“Well you see.” Tina turned towards the brunette and started kissing the brunette’s chest and shoulders. “I have this so demanding girlfriend who kept me up last night. All night.”

“Is that right?” Bette stretched her neck to allow Tina access to her skin, tucking her hand under the side of her face. Smiling wildly.

“Oh yeah.” Tina moved up and pushed Bette back against the pillows once again. The brunette’s long hair covering the pillow. “She’s very exacting and highly charged. Very persistent.”

“Umm, can’t that be a good thing though?” Bette sighed as Tina now moved to lay on top of her. Bette enjoyed the feeling. Their skin sliding smoothly on the other. The blonde’s legs slipping between the brunettes’ again like last night.

If you haven’t seen it yet, check out this Virtual Pride Festival. The 19th annual WE’RE FUNNY THAT WAY festival with host Maggie Cassella is adapted into a virtual special due to the COVID-19 pandemic. The one-hour event celebrating the LGBTQ2+ community includes a lineup of comedy and music from Martha Chaves, Gavin Crawford, Lea […]