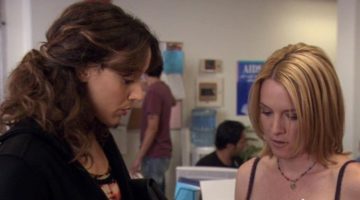 Bette smiled to herself with glee as she had been spot on about her assessment that Tina was an experienced runner as the two women ran side by side in the early dawn hours in London. Bette was a fit, natural athlete, tall and long limbed. The brunette’s arms, legs and core were trim, but well-muscled and toned from her dedicated efforts in the local campus gym and on the streets and parks of the English capital city. All physical parts equally balanced and elegantly presented.

Years ago, Tina had developed her own style of running from the years she had spent on her middle and high school track teams. She may not have the limb length that Bette did with the brunette being two inches taller, but she could hold her own with the lean med student. Their youthful stamina was equally matched. They often teased each other as to who could go faster or farther as they tested one another mile after mile.

Most evenings, after they had been apart for the day in lectures or labs, they met back up at the campus flat and spent their evenings studying together, relaxing or just chatting. Taking the opportunity to get to know each other that much better.

They shared their own family history and personal stories. Each woman revealing past family heartache with Bette’s mother’s death when she was a child and Tina’s abandonment by her father at a young age. Both events leaving lasting scars on their individual lives. They spoke fondly of their siblings: Tina – her younger sister, Ashley and Bette – her older brother, Jeremy. Tina adored her kid sister and although Bette and her brother didn’t always agree on important matters, she still loved him.

In spite of their early personal sorrows and loss, the two women found that they shared life goals and were equally committed to family. They took their personal obligations seriously. Both women valued friendships and those they held close to their hearts. Integrity was a key factor in both their personal lives and would prove to be just as valuable in their quickly approaching professional lives.

After weeks of getting to know each other better, they were quickly at the point of being nearly inseparable. They secretly yearned to spend every spare minute they could together. Neither woman wanted their late night chats to end. Many evenings they talked well into the early hours of the next day. Sharing cups of tea or glasses of wine or sherry. Several nights, the women had little energy left to stir from the couch and exhaustion quickly crept in on them after long days spent at the university.  When that happened, they simply pulled throw blankets off the back of the long couch to cover themselves with. They used square cushioned pillows to snuggle in and slept on opposite ends of that very settee. Bette angling her long sock clad legs behind Tina’s body and the blonde positioning hers in front of the brunette. Both content with their cozy closeness, they dreamily drifted off into the land of unconscious contentment. Being this close to each other put soft smiles on their faces.