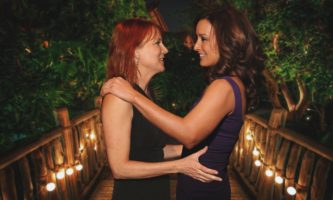 The two sisters had been each other’s rock over the year in many ways. But when Kit died, Bette swept the grief she felt away and shoved her sorrow down deep inside. She had used her emersion in the mayoral election campaign to avoid confronting the aftermath of Kit’s death and how it had affected her.

Tracy Burrows, Bette’s therapist, discussed the foundation concept with Bette and asked several key questions. She thought the idea was honorable as well as a step forward in Bette’s recovery from her grief. The brunette would be facing her sorrow yet again by building a path for acceptance and turning her heartache into a force for goodwill in her sister’s name. The therapist explained to Bette that in doing so she was allowing Kit to continue to be a positive force in her life as well as in countless others. Bette’s intention of having Kit’s life continue to be a force for good would be realized.

Bette felt more in control of her emotions regarding the passing of her sister. She could now talk about Kit without being emotionally compromised. And with the help of both Tina and Angie, she often laughed along with them retelling many of the amusing stories about her older sister. She knew that building this legacy for Kit would be another key element in moving forward and remembering the former singer and businesswoman in a favorable role. Bette also knew she and James would make this foundation a true source for assistance to the community and to the people that needed the support the most. Deep inside, she hoped Kit would be proud of her efforts and what she created.

With her commitment to their renewed relationship, Bette didn’t hesitate to share her personal progress with Tina. She was determined to put the past truly behind them and embrace a future they both wanted to share with each other.

Through this therapy and self-realization, Bette was letting go of long bent up emotions and deep sorrow. And she disclosed with the producer that she was losing the anger she felt in the loss of Kit. Tina was supportive of her partner and naturally was there to offer comfort and compassion as Bette needed it. Encouraging words and physical comfort in hugs and embraces were freely given. Tenderness too as they lay wrapped together in bed, holding one another. Tina knew Bette needed the physical as well as the emotional connection that they had always shared. The producer was content just holding her soulmate.