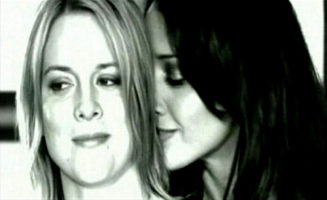 Tina stretched herself out, feeling well rested. She climbed out of the bed and headed straight to the bathroom. She took a shower and got dressed in shorts and a T-shirt. Coming downstairs, she started the coffee pot. Her stomach emitted a grumbling sound, so she decided to make some toast and jam. Taking the needed ingredients out of the fridge, Tina closed the door and paused. A photograph of herself and Bette with huge grins on their faces, taken in bed with her phone camera several days ago, was attached to the fridge door with a magnet. Tina smiled as she recalled all kinds of fun they had indulged in before the picture had started.

Almost two weeks had passed since the incident at the grocery store, and everything had been going smooth so far. Tina had made sure that the man wouldn’t take any legal actions against Bette, and upon arriving home from the store, Bette had divulged what troubled her, how she couldn’t get rid of paranoid feelings that she was being followed around by someone. Tina had comforted her distraught girlfriend that night, convincing her that she was probably experiencing post-traumatic stress disorder, explaining her assumption by reminding Bette of all the pain and agony she had been subjected to in her past. Tina had held her, whispering reassuringly in her ear that everything was going to be alright with time and that she would always be there to support her. Her comforting skills had worked, because Bette had been acting normal ever since and had appeared to be in good spirits most of the time.

Tina put a cup of coffee and a plate with two toasts on the kitchen table, picked up her laptop and took a seat. Sipping the coffee, the blonde scrolled through her mail, answering to some of the messages from work. She was also behind in her banking, so she proceeded to pay the bills and moved some extra funds into her savings account. Chewing on the toast, Tina then checked her social media for any updates from friends. There was a photo of Dana and Lara on vacation in Paris. Marina had posted a photo of Jenny eating ice cream, with an affectionate note under it. A photo of her sister Karen with a drink in her hand and cuddled up to some woman, yet another one of her short-term flings, flicked across the screen then. Alice had uploaded a video of herself and Tasha having fun on the beach with their dog, an English bulldog with a name Donut, which Alice had came up with to tease Tasha, playing on the stereotype that police officers hung out in donut shops.